Yoga for all ages, sexes and people of all professions 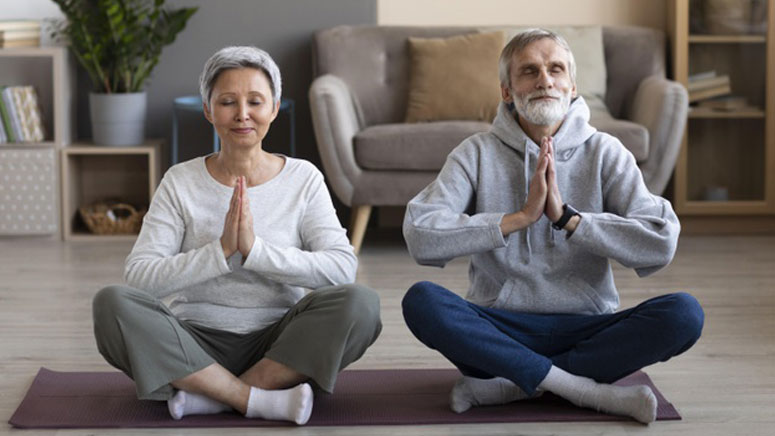 Yoga for all ages: He who untiringly practices yoga in all its aspects attains success. This is notwithstanding the fact whether he/she is weak, diseased, decrepit, old, or young – Teaches the Hathapradipika (1-64).

Have sound health – Then, yoga is for you;

Yoga is a habit.
Yoga spans your lifespan
Yoga eliminates all ailments
Yoga is for all ages, sexes, and people of all professions.

It is your shadow and your lifelong companion.
It saves time, money, and health.
It prolongs the life span.

Yoga is for the young and also for the old
Yoga is for the men and also the women
Age, caste, creed, religion, and communities merge before yoga.
Yoga transcends all barriers – geographical, sexual psychological, or physical.

It’s however important to make yoga a habit right from an early age. The reason is that the limbs remain supple at that time. Moreover, the limbs will continue to remain so even as the internal organs become strong.

What if you are past the prime of life?

However, if you are past the prime of life then also yoga can be your habit for a fruitful healthy lifestyle. Just go for the yogic breathing and posture correcting exercises. The choice of these asanas must as per your general health condition including that of your internal organs and muscles. Having short-listed the exercises, regularly practice them, but moderately.

The complex exercises learned after 20 years of age should not be practiced (totally omitted) as one approaches the late middle ages if one experiences strain or discomfort while practicing them.
After 50 years of age, every person must annually consult a physician and have a medical check-up done on his/her general health.
As the metabolism power decreases in the late middle ages, it is advisable for such persons to avoid the strenuous asanas, and just concentrate on the breathing exercises and the ones that are not time-consuming, non-strenuous, and simple.

The right age to start Yoga

The ripe age to start practicing yoga regularly is from 18 years of age.
The difficult asanas are to be learned for 20 years.

The easy and basic courses and principles of yoga must be imparted right from childhood. These initial training including the breathing asanas should be given to boys and girls between 12 to 16

years of age. However, these practitioners need not practice yoga regularly.

Children below 8 years of age must never attempt any yoga (be they dynamic or static) exercises. Their general physiology is still in the growing stage. Moreover, their spines are still rather weak and their muscles and bones are also not yet fully formed. Making them do the asanas forcefully can have adverse effects. There may even be a deformity in such instances!
What is more, children less than eight years of age also lack concentration.

Children between 8-12 years of age can attempt simple yoga postures. The best yogic posture is Surya Namaskar. This can go a long way in making them ardent practitioners of yoga as they grow up. Actually, children in this age bracket need more of outdoor and physically vigorous activities like games to grow up naturally rather then systematic exercises.

Avoid the difficult asanas. Such exercises tax their physical ability and affect their growing process.

Go for the simple postures which help their transition stage.

The Surya Namaskar asana is ideal for them.

The youth in their pre-puberty stage ought to practice synchronized breathing and shift to the advanced postures only after attaining maturity.

They should also avoid the upside-down positions as they may affect thyroid gland functioning. The nervous system besides the other important organs and glands isn’t also sufficiently developed. Moreover, the endocrine balance is also not mature enough.

Since they lack control over their muscles as the mature people have and also because they aren’t yet physically mature, the boys and girls in the pre-puberty stage should not put unnecessary pressure on their limbs and internal organs.

Regular yogic exercise can correct the postures and figures in a few months’ time.

People with protruding belly or those who are too thin should practice only those asanas which they can without putting unnecessary strain on their bodies. They must also ensure that they do not have any disease.

People with physical deformities can continue with their yogic schedules. But opt for only those postures recommended by a yoga therapist.

If anyone has suffered a dislocation of limbs, they too can carry on the yogic exercises with proper guidance.

People with functional disorders or organ defects can do the yoga asanas only after taking due advice from a yoga specialist. (This is true even if they may be supple enough to exercise.

Hope you love reading “Yoga for all ages, sexes and people of all professions”. Share your view in the comment section below.

Setting the stage for Yoga get the optimum benefits from yoga