Yoga Surya Namaskar Exercise: Achieve mental & physical sanity
The Universe is composed of movables and immovables.
The entire Universe is sustained by the Sun!
–The Rig Veda 1-11; 115-1 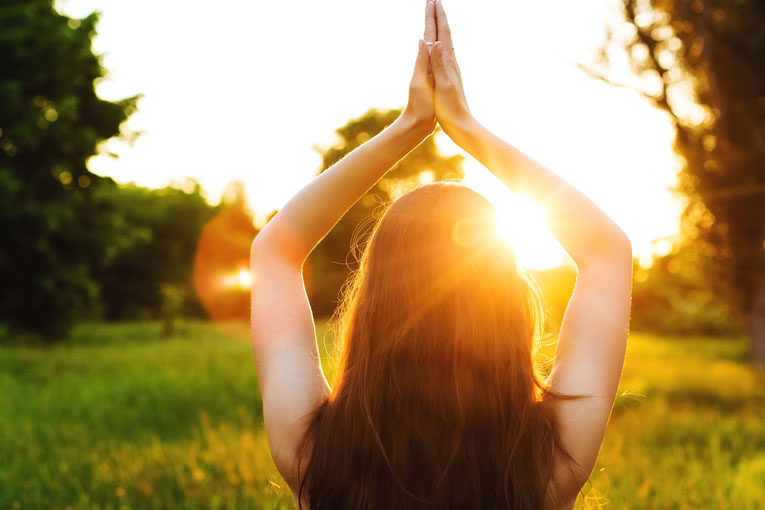 The nomenclature ‘Surya Namaskar‘ is composed of the term ‘Surya’ (meaning ‘The Sun God’) and the term ‘Namaskar’ (connoting obeisance). Both the words have their roots in Sanskrit.

Surya Namaskar has been devised by the Indian sages over the ages as a complete exercise.

Once you start practicing Surya Namaskar, you will notice that it has a scientific base. You’d appreciate it as the best physio-spiritual compact exercise in the world. Surya Namaskar develops both the mind and the body simultaneously. The exercise aims at a harmonious booster of all the physical features while galvanizing the mind.

What exactly is Surya Namaskar Exercise?

Surya Namaskar is a conglomeration of 12 postures. They are simple. This sequence of a dozen of the yogic exercises blends breathing and physical activities in a scientific manner. The Surya Namaskar postures follow in such a way that if posture No.1 makes the yoga practitioner bend backwards, then posture No. 2 needs the practitioner to bend forwards. The consequence is an all-round exercise of the body.

Who can do Surya Namaskar Yoga

What sbout those with poor health & the elderly?

Those with a poor constitution can also practise Surya Namaskar. But, it is advisable to have health check-up carried out prior to taking up the postures. If they get the nod from the physician, they will observe a definite improvement in their overall physique even as their mental strength will start turning positive. In fact, their outlook towards life will change for the better.

The elderly people can surely do the 12 postures. These exercises carry special benefits for the people who are approaching the middle ages. It is at this age that the limbs start stiffening.

Suppose one is unable to do the asanas for various other physiological reasons. One can then practise the Surya Namaskar postures as the sole exercise module.

Absolutely nothing! And, that’s the best part of all the yogic byams or asanas (exercises). They are neither expensive nor time consuming. What is more, each of them including each of the 12 Surya Namaskar postures can be completed within a few minutes.

You can do the Surya Namaskars in your home.

When to do the Surya Namaskar Yoga?

The Surya Namaskar postures are very effective means to limber up. Hence, they are   generally carried out before the other asanas. At the end of the 12 postures, you will feel refreshed and relaxed.

Notably, if you are in a rush you can simply do the 12 postures within the span of just 15 minutes at the most. These complete exercises will substitute the other asanas which you have not been able to do that day. The effect would be equally energising!

Yogic breathing to resistance cold the infection of the nasal mucous