The Srikrishnavalllabhacharya (P-250) in Yogashastra: Kirana Tika and the Jyotsna on Hathapradipika (III-79) encapsulates Sarvangasana yoga in its entirety. 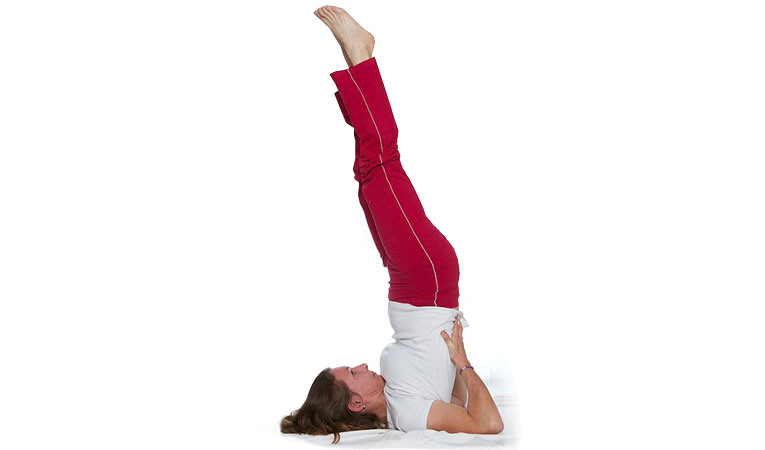 Sarvangasana yoga requires the involvement of the entire body and also the mental faculties which involves three stages.

While Matsyasana releases the sinews in the abdominal and dorsal portions, Sarvangasana yoga requires also these muscles to be deeply involved while carrying out the posture.

Sarvangasana is the alternative asana for the practitioners who cannot do Sirsasana. Nonetheless, even those people who have mastery over Sirsasana should also practise Sarvangasana. In fact, Sarvangasana has all the benefits of Sirsasana and more without having any of the side effects that Sirsasana may have on some people.

Sarvangasana has immense therapeutical and physical advantages for the dedicated practitioner. 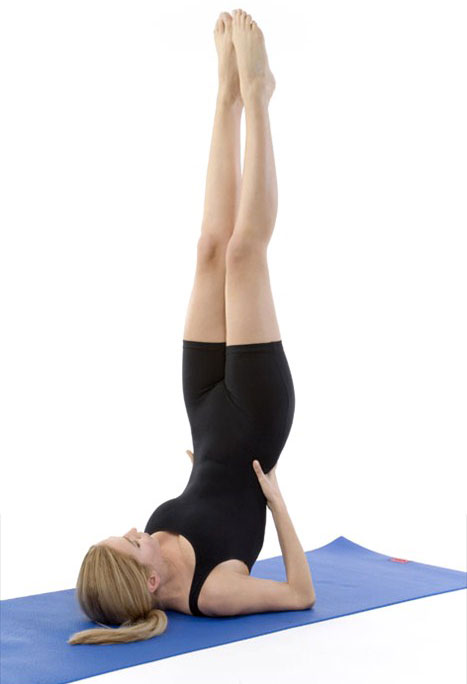 You should be having the normal breathing rhythm throughout the posture.
Subsequently, you can integrate the controlled breathing sequences as would be explained in the following sections.
Never quicken the breathing pace while pressure is being exerted in the thorax as you hold on to the posture.
Sarvangasana does not at all require the retention of breath.

There are four stages, viz., the common points, the starting pose, the absolute posture and the returning stage .

The absolute posture is again divided into relevant sub-sections so that you can concentrate on how to keep the different parts of your body while maintaining the balance and also during the actual Sarvangasana stage.
Let’s analyze each stage. 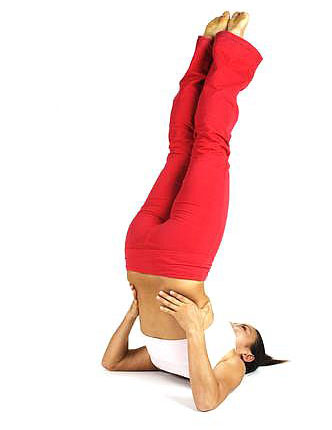 They can do the action by using their palms to balance the act.

Support your trunk only on your palms at the initial stage.
Your palms should be lightly holding your trunk. This will aid the balancing act.
Ensure that the palms do not slip while holding the trunk. Else your body will slant sideways.
The Elbows Position

Gradually shift a portion of the upturned trunk and body to your elbows and shoulders.
The elbows should be neither away nor very near from the sides of your body.
You will not be able to properly lift the trunk if the elbows are positioned in spots that keep them wider than your shoulder length.

The elbows alone should be carrying too much of your body weight.
Actually, your shoulders and elbows should be equally sharing the body weight along with the palms.
The Legs Position

Don’t move the legs towards your head as you support your trunk lightly on your palms.
At this stage, keep the legs just in the perpendicular position and gain the balance.
A common problem faced at this stage that your legs will tend to shift from the perpendicular position.
Control this tendency by tightening your thigh and knee muscles. Stretch vertically the thighs and knees. At the same time, press your back with the palms.

The Sarvangasana posture should be maintained by keeping your legs straight but not at all tense.
Your toes and heels should be kept close together.

The most significant aspect of Sarvangasana is the chin-lock. It is done by pressing the upper portion of your chest against the chin.

The palms will have to slowly slide downwards along the back of the thighs till the back reaches the floor.

Here are the lists of the therapeutical and physical advantages arising from regular practice of Sarvangasana.

Halasana Yoga for beginners & its Benefits