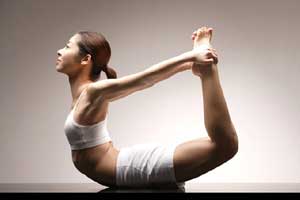 The audio-visual medium of the internet edition of Bikram Yoga has it thus about Bikram Yoga:

“America’s obsession with good health and exercise is leading to a boom in yoga. And one person at the forefront of the movement is turning up the heat with his torture chamber approach to the practice. Bikram Choudhury is his name, and all his postures   are all from India… ”

The Bikram approach is all American!

Bikram yoga sweats you pout… and that literally means slogging it (the physical postures within a room that is preheated to 105 degrees.

Bikram has collaborated with universities in California and New York to conduct clinical trials and study the effects of Bikram yoga. The results are positive!

BIKRAM CHOUDHURY: A TRYST WITH DESTINY

Yogiraj Bikram Choudhury along with Rajashree Choudhury – his wife and the five-time winner of all India yoga championships – along with a dedicated team of experienced and accomplished faculty members have made ‘Hot Yoga‘  or ‘Bikram Yoga‘ a hotly pursued activity.

The birthplace of Bikram Choudhury is Calcutta.  He practiced yoga under the tutelage of the then most renowned physical expert, Bishnu Ghosh. Bikram Choudhury was lucky enough to have been tutored by this younger sibling of Paramahansa Yogananda – one of the few most accomplished yogi practitioners of those times.

Paramahansa Yogananda founded the Los Angeles-based ‘Self-Realization Fellowship’ and also wrote The Autobiography of a Yogi — the best seller till date on yoga.

As a regular student of the Calcutta situated Ghosh’s College of Physical Education, Bikram was strenuously involved in the daily yogic schedules for at least six hours.  Owing to his dedication Bikram, at the age of 13, bagged the National India Yoga Championship award. Bikram swept this award the successive three times. Finally, Bikram called it a day at the competitive level.

The stage was set for Bikram Choudhury when he crossed four summers.

This was the breakthrough for Bikram. It came in 1972.

Bikram was called by the 37th President of the USA, Nixon, to be treated for an ailment that the President was suffering from after a South Pacific tour.

Bikram made Nixon undergo the ‘Hot yoga‘ treatment – and he was cured.

Immediately after the recuperation, the President asked, “Are you an Indian black magic magician?”

That built the bridge!

President Nixon gave an open invitation to Bikram to come and live in the United States!

The American business way is ‘Franchise!’ Now, Bikram Yoga has franchises across the USA.